2020-2021 New Books and Ebooks at Holt Library: in response to the COVID-19 pandemic, the library has moved a majority of funds to e-books and online resources.

How to use this Guide: the Dewey Decimal system explained

Melville Louis Kossuth Dewey was born on 10 December 1851. Keenly interested in simplified spelling, he shortened his first name to Melvil as a young adult, dropped his middle names and, for a short time, even spelled his last name as Dui. 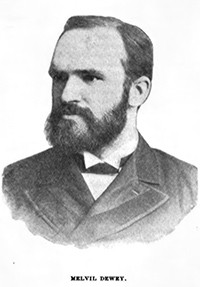 Dewey invented the Dewey Decimal Classification (DDC) system when he was 21 and working as a student assistant in the library of Amherst College, drawing from Sir Francis Bacon’s classification of knowledge as well as library classification systems designed by William Torrey Harris and Natale Battezzati. Dewey’s promotion of his classification and emphasis on centralization of cataloging efforts set in motion a new era of “library economy.”

Dewey’s role in American librarianship is impossible to ignore. Dewey helped establish the American Library Association (ALA) in 1876; he also co-founded and edited Library Journal. Dewey became the librarian of Columbia College (now Columbia University) in New York City in 1883 and founded the world's first library school there in 1887.

Melvil Dewey died after suffering a stroke on 26 December 1931, at age 80. His legacy is complex, but nearly ninety years after his death, he is best known for creating the most widely used library classification scheme in the world, the Dewey Decimal Classification.

The Dewey Decimal system is used to organize Holt Library. How does it work? How can I find a book?

Dewey used decimals to organize knowledge. Nonfiction (factual) books are organized by topic. There are 10 sections, and you will find those 10 sections in our library, in order.

We are always happy to help you find a book and save you some time! When you visit our shelves, you're welcome to just browse around and look at items, though. Since books are grouped by topic, you'll find other books that interest you. If you want to know how the system works and want to teach yourself, keep reading this box!

The numbers to the right of the decimal indicate more specific categories. For instance, here is how a call number is assigned to a nonfiction book:

And then there is a letter after the numbers; this is usually the first initial of the author's last name.

At Holt Library, fiction books are labeled with an F to indicate the fiction collection, and then we add the first 3 letters of the author's last name. For instance, you'll find The Count of Monte Cristo by Alexandre Dumas shelved as F DUM.

Who was Melvil Dewey?

Melvil Dewey was an interesting man. The "absurd spelling of English...wasted 3 years of the average schoolchild's life," he was quoted. He felt that English should be reformed so that words could be spelled the way they sounded.

He personally changed his last name by getting rid of all of the "unnecessary" letters ("Melville" became "Melvil"), and legally changed the spelling of his first name from "Dewey" to "Dui."

Lectures in his classes sped by at "...180 words a minute" as he paced back and forth.

Eccentric genius? "Nauseating slobberer," as one critic referred to him? At any rate, today the Dewey Decimal system is still the most widely used library classification scheme in the world.

--Prescott, Sarah. "Melvil Dewey, the Father of Modern Librarianship, was One Strange Guy. But His Classification System is Still Used in Most of the World." School Library Journal, 1 August 2001. www.napavalley.edu/Library/Documents/Melvil%20Dewey.pdf. 12 July 2019.

How to reach us

Fridays = Remote: reach us by chat or email

You will not need a library account to use online resources.

You will find online databases containing peer-reviewed articles, the library book catalog, and library resource guides (a collection of resources for your major, your classes, or your interests).

To borrow print materials (to check out books, technology, or DVDs):

1. Obtain an SCC ID card from the Cashier's office in Balsam building on the Jackson campus. (For students, this is easily accomplished during Orientation!)

2. Do one of the following:

--fill out this form

Then, simply carry your SCC student ID (which becomes your library card) with you at all times.

By activating your library account, you can check out books, laptops, webcams, earbuds, and DVDs, and you may use items for class that have been placed on Reserve by your instructors.